Ann Jarvis Pruitt, Executive Director of the Tennessee Alliance for Legal Services (TALS), was named a 2017 'Woman of Influence' by the Nashville Business Journal. Pruitt was one of only 32 honorees and was selected in the category of nonprofit leadership. The Nashville Bar Journal explains, "The Women of Influence Awards honor women who lead and make it a priority to give back, to encourage and to inspire. Continuing this tradition and growing the strength of business women is essential to our community's success." Honorees were presented their awards on Wednesday, February 8, 2017, at an awards luncheon at the Omni Nashville Hotel.

Pruitt joined TALS after six years at Baker Donelson in the firm’s litigation section, followed by thirteen years at Dell Inc. where she served in the Legal Department as Executive Director supporting Worldwide Operations and later Ethics Investigations. She earned her law degree from the University of Tennessee College of Law in 1993. She became interested in poverty law issues through participation in the UT legal clinic and was awarded the Charles A. Miller Award for clinical achievement. She is the winner of  2007 Dell Foundation's Volunteer of Distinction Award for the Americas.

For the awards luncheon, the 2017 Women of Influence honorees participated in an interview to celebrate their success. See Ann's video here: 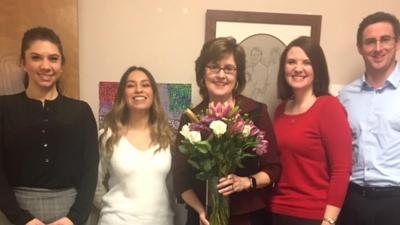