The Supreme Court elected Justice Jeff Bivins to be the next chief justice of the Court. Justice Bivins was unanimously elected by the Court. His term that began September 1. Justice Bivins was appointed to the Court in 2014 by Gov. Bill Haslam. Prior to assuming that position, he was a judge on the Tennessee Court of Criminal Appeals from August 2011 until July 2014.

Justice Bivins was informally sworn in as chief justice at TALS' Equal Justice University Leadership Luncheon on September 1.  The Leadership Lunch will featured remarks from Tennessee Bar Association President Jason Long. The event was sponsored by Lincoln Memorial University's Duncan School of Law. Justice Bivins will participate in a formal oath of office ceremony that will be held at a later date with Gov. Bill Haslam.

Justice Bivins was also a featured speaker at the Equal Justice University conference. He addressed the event at the Wednesday Welcome Lunch on August 31st.

“I look forward to the opportunity to continue to serve the citizens of Tennessee in this expanded role,” said Justice Bivins. “Serving alongside two former chief justices on a Court with more than 80 years of judicial experience among the justices, I know we are well positioned to lead the efforts of the judiciary.”

Justice Bivins was appointed to the trial bench in March 2005. He was elected to a full 8-year term in 2006. He also previously served in a trial judge position from July 1999 through August 2000.

As a trial and intermediate appellate judge, Justice Bivins served on the Board of Judicial Conduct, and previously served on its predecessor, the Court of the Judiciary. He served as president of the Tennessee Judicial Conference and continues to serve on its executive committee. He also has served on the Tennessee Judicial Performance Evaluation Commission. He is a member of the Harry Phillips American Inn of Court and the John Marshall American Inn of Court, having served as president of the John Marshall Inn from 2003-2008. He is a member of the Tennessee Bar Association and the Williamson County Bar Association. He also is a fellow of the American Bar Foundation, the Tennessee Bar Foundation, and the Nashville Bar Foundation. Prior to his appointment to the trial bench, Justice Bivins practiced law with the firm of Boult, Cummings, Conners & Berry PLC in Nashville. He also served as assistant commissioner and general counsel for the Tennessee Department of Personnel.

“Chief Justice Sharon Lee has accomplished a great deal over her term as chief justice, from efforts to modernize the court system, to addressing the needs of business litigants, and taking steps to improve our indigent defense system,” said Justice Bivins. “It’s a privilege to guide the court on the heels of her excellent leadership.”

The Tennessee Constitution states that the members of the Supreme Court “shall designate one of their own number who shall preside as Chief Justice.” In addition to the regular duties of a Supreme Court justice, the chief justice is responsible for administrative functions of the court, such as setting dockets, making designations, and ensuring the efficient and orderly administration of justice throughout the state courts.

See the announcement from the Administrative Office of the Courts here. 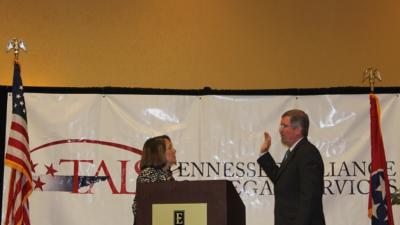