Each year TALS honors some of our state’s outstanding advocates. Tennessee is fortunate to have many hardworking and passionate access to justice advocates however, the New Advocate of the Year Award and the B. Riney Green Award seek to recognize and emphasize the value the access to justice community has for two particular kinds of advocate accomplishments. 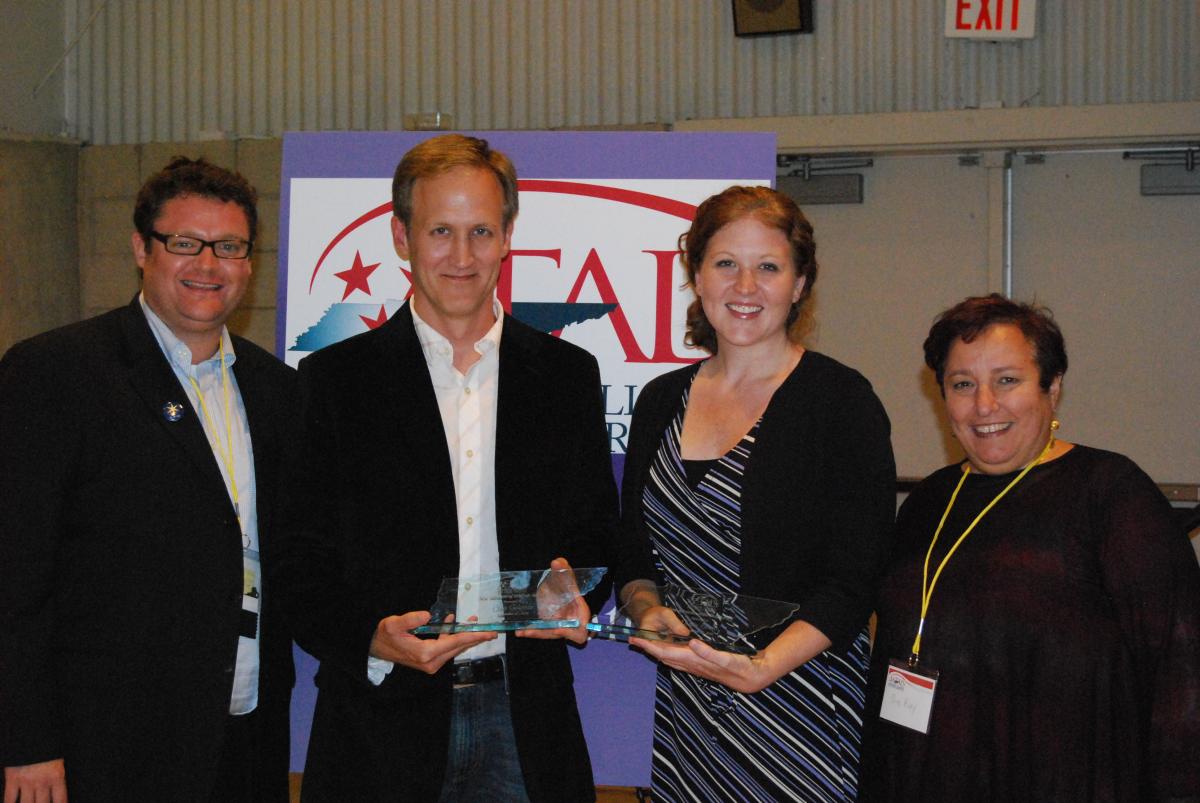 The New Advocate of the Year Award is an annual recognition of affirmative, energetic, and effective advocacy by an advocate who has been with their program less than five years. This award seeks to honor new advocates who use their legal skills in active and creative ways that produce outstanding benefits for individual clients and communities. This year, TALS awarded Katie Evans, the Legal Aid Society of Middle Tennessee and the Cumberlands, and Chris Coleman, the Tennessee Justice Center, with the Tennessee Alliance for Legal Services’ 2010 New Advocate Award.

Katie Evans has been with the Legal Aid Society of Middle Tennessee and the Cumberlands (LASMT) for only two years, but in that time has handled over 500 cases. Fifty of these cases pertained to Tennesseans losing their TennCare home health care services and many others pertained to Social Security Disability Law. Evans has become passionate and knowledgeable about both of these topics, resulting in great benefits for her clients. To date, Evans has won all her Social Security cases that have gone to hearing and several prior to hearing. Additionally, Evans was played a pivotal role in two successful Federal Court cases pertaining to TennCare violations of the Americans with Disabilities Act.

When asked about her work as a legal aid lawyer Evan’s said, “The only reason I went to law school was so that I could be a legal aid lawyer. Now that I’m a practicing attorney and meeting with my clients in their homes and communities, I am reminded daily why I am here. I think as legal aid attorneys, our purpose is to shine a light on the injustice that people in poverty face and force the rest of the community to see that it exists and change it.”

The enthusiasm Evan’s brings to her work is palpable. Clients have expressed their gratitude for Evan’s resp

ectful and empathetic approaches to her representation, and colleagues have appreciated her professional, proactive, and passionate approach. As Gary Housepain, the Executive Director of LASMT and the Cumberlands, said, “LAS got it “right” when they hired Katie and she has exceeded our own lofty expectations of her. She is one-of-a-kind and inspires clients, families, and colleagues with her zealous and compassionate advocacy.”

Chris Coleman is currently a staff attorney at the Tennessee Justice Center (TJC), but Coleman began his involvement with TJC as a lawyer in private practice serving as a board member. Witnessing the impact TJC was making on the behalf of poor Tennesseans inspired him to make a career move to public interest law. So Coleman joined the TJC staff and hit the ground running. My work at TJC is not driven by charity or pity.” Coleman said of his new position. “Rather, it’s driven by a concern for the fundamental rights of clients faced with the loss of the most basic necessities of life.”In less than a year’s time, Chris Coleman has made himself indispensable at T

JC. When faced with complex issues pertaining to FEMA regulations and the Health Care Affordability Act, Coleman has proven to be an invaluable research and training resource to the TJC staff and community members. As an advocate, Coleman has not been afraid to take on intimidating legal issues, such as strengthening due process protections for disaster victims seeking FEMA assistance. In cases such as these, Coleman has been proactive in creating and executing advocacy strategies and his efforts may very well influence the future actions of the Obama Administration pertaining to due process.

As Gordon Bonnyman, the TJC Executive Director, and Michele Johnson, the TJC Managing Attorney, said in Coleman’s New Advocate Award nomination, “He has been great at tracking down the answers we need to solve individual client problems or move the system in the right direction. Most importantly, Chris’s energy and enthusiasm has given us both hope about a bright future for TJC and the equal justice community as a whole.” 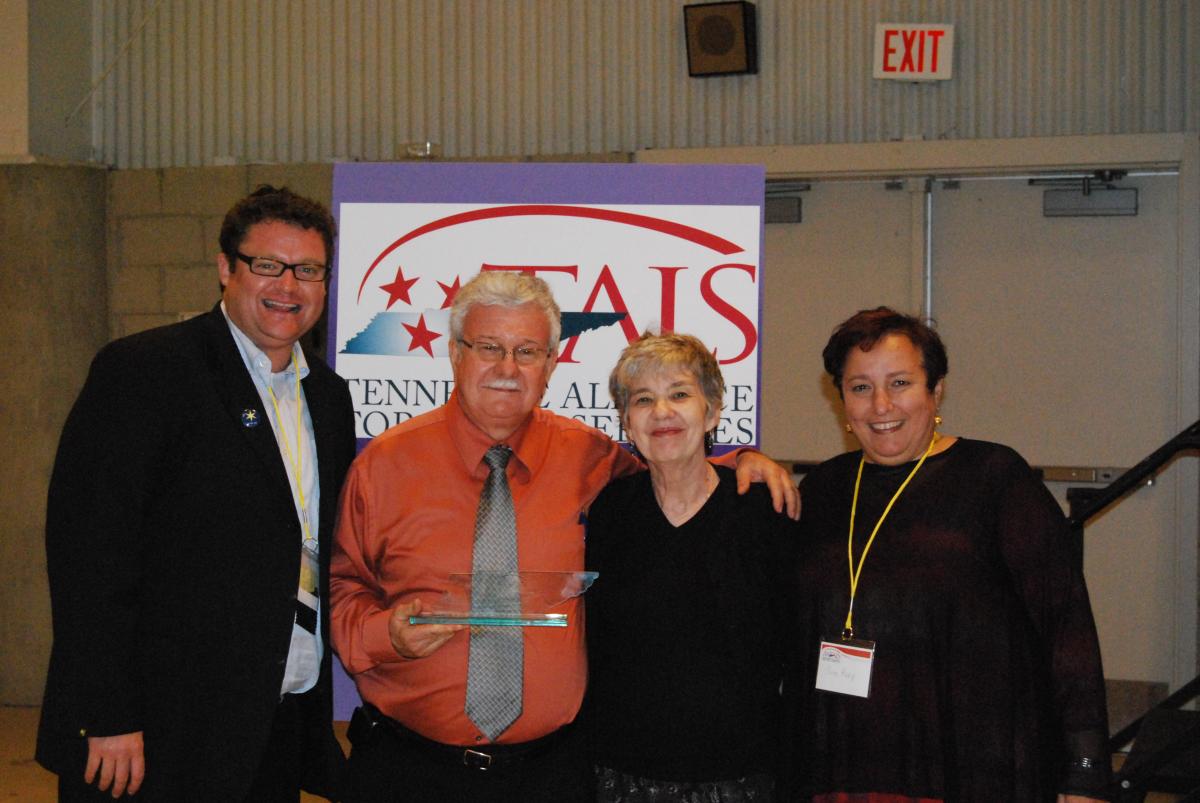 The B. Riney Green Award is an annual recognition of an advocate who promotes inter-program cooperation or otherwise strengthens the provision of legal aid in Tennessee. This award is named in honor of B. Riney Green, a Nashville corporate attorney and a Republican, who in the late 1990s relentlessly led Tennessee’s efforts to prevent the U.S. House and Senate from adopting provisions that would reduce funding to legal services and increase restrictions on legal aid programs. Green’s efforts were essential to the successful national effort to resist legislative attacks and for his contributions; this award is named in his honor. This year, the Tennessee Alliance for Legal Services awarded David Tarpley, Lead Housing and Consumer Law Attorney for the Legal Aid Society of Middle Tennessee and the Cumberlands (LASMT), with the 2010 B. Riney Green Award.

David Tarpley is the Lead Housing and Consumer Law Attorney for LASMT. Over the course of his career Tarpley has become the pre-eminent consumer rights attorney in Tennessee and shaped the lives of thousands of Tennesseans. Tarpley has been a resource at the Tennessee Legislature for consumer protection laws, taught law students, and practiced as a legal aid lawyer for 40 years. In all that he does Tarpley exemplifies the B. Riney Green award’s emphasis on cooperation.

With clients Tarpley makes people feel heard and a valued part of the legal process. As one client said, “I was treated with dignity and respect. Always returning my calls promptly.” Yet another client stated, “He treated my 85-year-old mother with total respect and seniors are not always treated with dignity.” With his colleagues Tarpley is always quick to lend his expertise through trainings, consultations, or provision of legal services regardless of the program in need. He is often described by other attorneys as a “lawyer’s lawyer” because he is quick to support the work of others whether they are working with legal aid, in private practice, or studying law. With his students Tarpley is a mentor and an invaluable resource. His students at Vanderbilt are fortunate enough to have his guidance as a professor, but he has also never hesitates to provide clear and patient guidance out of the classroom as well.

Tarpley’s open demeanor, professionalism, and mastery of consumer protection law have earned him the respect of many including his adversaries. This is seen most clearly in the endowments and donations made specifically for consumer protection work to LASMT’s by onetime opponents of Tarpley’s. Through these donations, and all the other ways Tarpley has touched the lives of Tennesseans, his work will live on for generations to come. As Gary Housepian, the Executive Director of LASMT, put it, “David has been a colleague, mentor, teacher, expert, zealous advocate for 40 year and is still going strong.”

To all the access to justice advocates working in the state of Tennessee, TALS would like to express our gratitude for your service and commitment to vulnerable Tennesseans.

The news about recent activities for needed peoples.