“… on more than one occasion they have literally saved my life” –
Brian, Tennessee Justice Center client 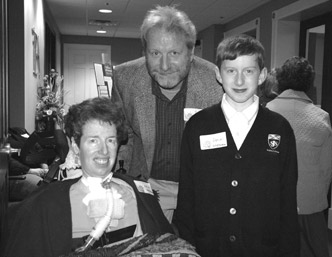 Erin Brady Worsham is a talented artist, a devoted mother and wife, an active community member, and is living with ALS. ALS, better known as Lou Gehrig’s Disease, causes nerve cells to die. The death of nerve cells causes muscular atrophy, and an ALS patient eventually loses the ability to walk, talk, breathe, and swallow. Sixteen years after her diagnosis, Worsham faces this fate, but never allows it to define her. She continues to paint, speak publicly about her experiences, and attend her son’s sporting events. And, though today Worsham is totally dependent on those around her for survival, she focuses on what she can do saying, “I feel blessed that I haven’t lost my ability to think.”

Since 1996, the Tennessee Justice Center (TJC) has worked for the wellbeing of people just like Erin Brady Worsham. TJC is a civil legal service provider and advocate for the poor in Tennessee with a focus on healthcare and assistance to victims of the May 2010 floods. TJC is client and collaboration focused, and, as their mission highlights, is inspired by a deep passion for the work that they do and people they serve.

Gordon Bonnyman, the executive director of TJC says of his work, "We serve families who, in the midst of poverty, misfortune and injustice, inspire us with their courage and generosity of spirit. Working through the law, we have a chance to make a huge difference in their lives. And by 'speaking truth to power' on their behalf -- compelling powerful government and corporate institutions to respect the legal rights of the powerless and the poor -- TJC is working to fulfill our nation's pledge of Equal Justice for All. To get to work for such people and ideals is a privilege."

For 10 years, TJC has worked to protect Worsham’s TennCare coverage and has been inspired repeatedly by her strength. Worsham’s perseverance through her experience negotiating her many struggles even led TJC to honor her as one of their first Mother’s of the Year. Through this recognition, TJC acknowledged Worsham’s inspirational role in her community and her steadfast efforts to help other families stay together when faced with cuts to TennCare services or eligibility.

"One of the great blessings of my career is to have been able to work with the Worshams. Their faith, courage and generosity have had an extraordinary impact on our community, and me personally," said Michele Johnson, TJC's Managing Attorney.

Erin Brady Worsham’s story is just one example of TJC’s passion for their work and their respect for their client’s. The testimonials for TJC’s tireless advocacy in the name of the poor are numerous.

The Tennessee Alliance for legal services is proud to support the work of advocates such as those at TJC through training opportunities, advocate support, and legislative activities.